Top 12 Best Parachute Games Activities & its Benefits: Parachute games are widely popular kids’ games that involve both fun and exercise at the same time. In the games, participants use a sheet-like parachute that is around 20-30 feet wide in diameter. The best thing about parachute games has no specific rules. You can use your imagination, apply your creativity to do anything with the parachute to introduce a play. Children have huge potential when it comes to creativity, so this game can take any form and method as long as kids are thinking and having fun.

In this article, we’re going to introduce you to 10 popular parachute games for kids and share the benefits of playing them.

Benefits of Parachute Games to Play with Kids

Other than the obvious fun and entertainment, kids’ parachute games have a lot to offer when it comes to benefits. All of the games involve physical and psychological activities that aid in children’s growth.

Parachute games promote social interaction by bringing kids together in one game and working as one. Unlike many other games and activities that we see nowadays, parachute games involve constantly communicating with the participants. Kids interact, think, and laugh together, which helps them bond quickly with other kids.

Almost all of parachute games largely involve physical activities. In parachute activities, kids have to move their upper body, also known as the torso, to wave the parachute and play the games. It helps the children greatly to build a stronger body and develops a sense of movement.

Parachute games promote teamwork and encourage children to work together along the way. The games require participants to play together and end the game. It is a universal truth that rather than going alone, teamwork is what accomplishes things. Parachute games prepare kids at such a young age with this notion and teach them to win by playing together. 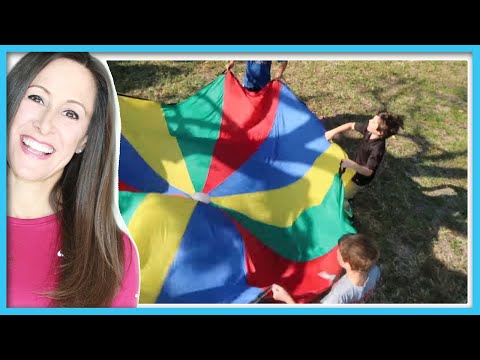 Holding the parachute firmly in a circle, children wave the parachute by moving their hands up and down. They can make smaller to bigger waves, and that’s okay. Waving can be played without thinking about doing things together or winning; because it does not focus on winning the game. Just fun is all.

This is one of the challenging parachute games. While tug-of-war is usually played with ropes, the kids will play it with the parachute. It should be more than four children and an even number of children at the same time. The number of kids will be divided into two groups, and they will stand opposite sides of the parachute while holding it firmly. On the signal, two teams will try to pull opponents to their side, just like tug-of-war. Whoever is successful gets to be the winner. 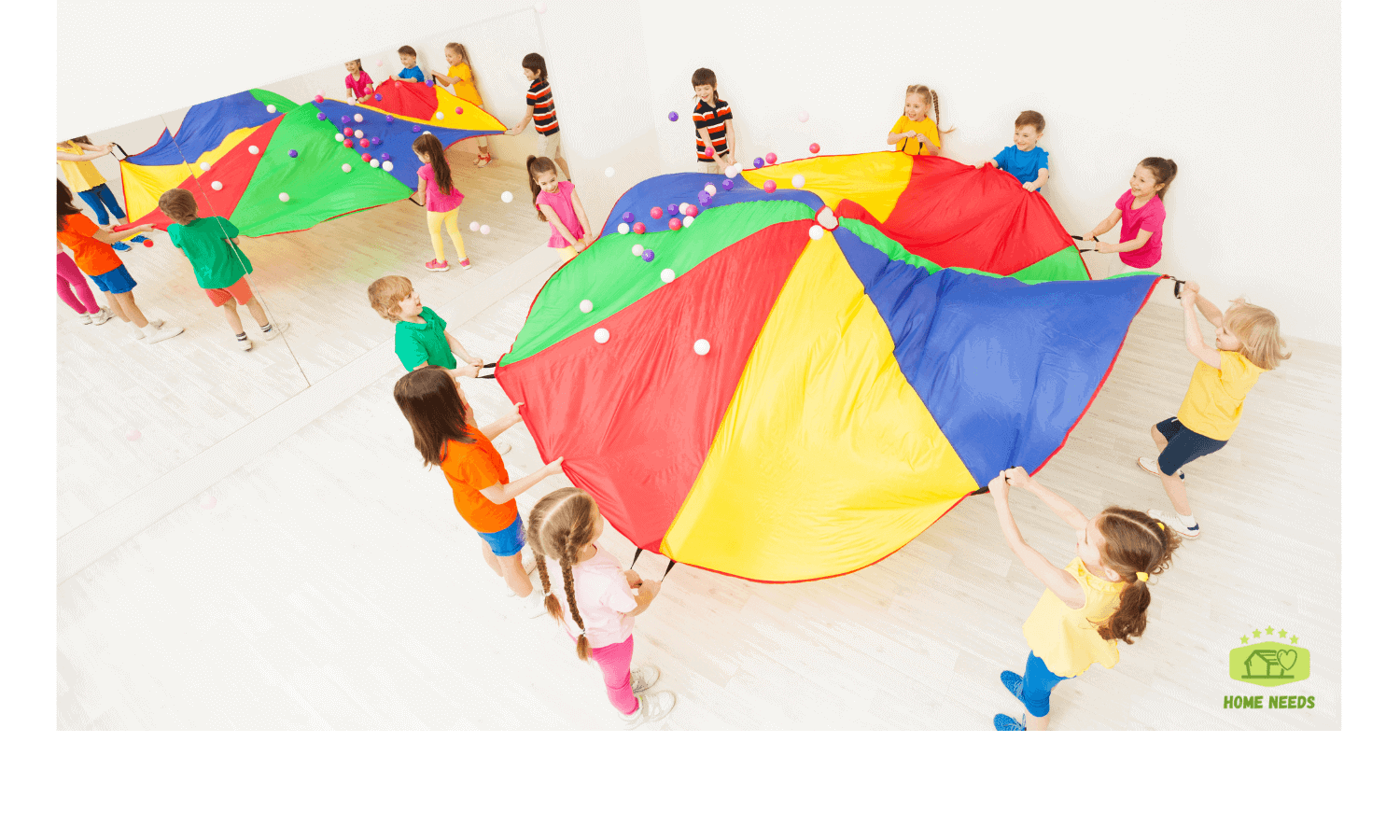 Playing beach ball does not require the beach, which is the interesting part of this parachute game. Just take a beach ball and place it over the parachute as the children circle around the parachute and hold the edges. Then just wave, wave the parachute to move the ball but don’t let it fall to the ground.

Distribute the children evenly throughout the parachute sides. They will hold the edges and stand sideways, facing the same way. Once that’s done, let them walk, dance, jog, skip around, maintaining the circle. Change direction from time to time to offer variation. The parachute will look like a merry-go-round as the children keep playing.

It’s a bit complicated but a fun game. You will need a large parachute and at least 8-10 children to play this game; the more, the merrier. Have the children circle around the parachute holding the edges. According to the number of children, give each a number by a circle. For example, 1-2-3-4, then 1-2-3-4 again. After each has a number, you can start the game. Call a number, such as 2, and all of the 2’s will have to run under the parachute and switch places. 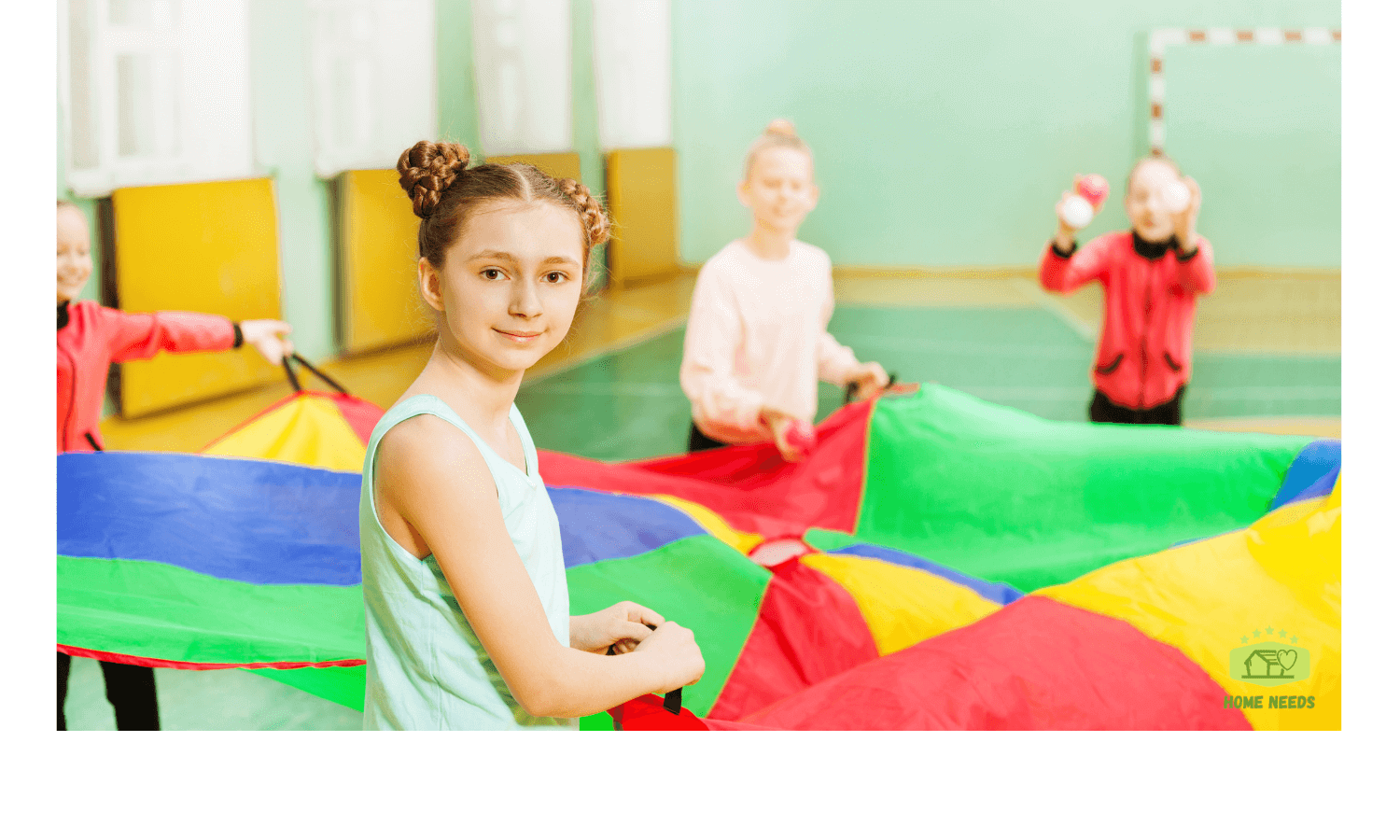 Out of many parachute games for preschoolers and kids, colors is one of the most educational and entertaining. If your kid is still learning the colors, this game will greatly help in introducing and remembering. First, place the parachute flat on the ground and have the kids standing on top of it. You will be the supervisor (or anyone) and give instructions involving colors.

Since the parachutes come in a lot of colors, it’s easy. For example, when you say “touch the color red,” everyone will have to do so. You can mix it up by twisting the commands like “put your left leg on that color and right hand on the previous one…” and such.

It’s a crawling game, so you should have a clean ground for the kids to play this one. Let the children spread across the entire parachute while lying on their backs. Hold the edges firmly and then crawl like an alligator. It requires teamwork, so the kids should move together to take the parachute crawling with them.

You have to be quick to play this parachute game. First, spread all the players evenly and have them hold the parachute edges. The children should lift the parachute as high as they can while holding it. Then call out two names; those two will have to run underneath the parachute and shake hands. They should be back to their spot before the parachute comes down on their side.

Throw some foam balls on the parachute. Have the kids circle around and hold the edges firmly? The kids will make waves and lift the chute up and down to pop the balls in the air without throwing them to the ground.

Parachute games are not only fun games but educational and involve physical exercise. Try these parachute activities and use your creativity to produce new games with your kids.